Etna is the great divide for Sicily. Even if not entirely the center of the island, the active volcano metaphysically splits the island into East and West with Palermo as the capital. While mayhem-morality-murder is vibe of vacationers at HBO’s mythic “The White Lotus hotel in Sicily’s east,westsidPalermo and the western part of the island are integral to passion of Sicily. Here’s a glimpse at all the real-life locations in Palermo and more.

Located in the northwest of Sicily, port city Palermo has opened its doors to everyone since its foundation more than 3000 years ago and thus is the convolution of Sicilian history, architecture and culture from the ancient Phoenicians, Greeks and Romans, Byzantines, Arabs, Normans to the decadent Kingdom of Two Sicilies and today’s world-recognized artists like Manfredi Beninati and Jenny Saville.

“Eastern Sicily has a personality that reflects the energy of Etna — tenacity and determination. Palermitani are perhaps more easygoing,” says Agata Polizzi, an art historian and Palermo native. “Remember we didn’t grow up under an active volcano but instead, for centuries, Palermo was the capital of the Kingdom of Two Sicilies and has always been the center of culture.”

First glimpse is chaos, but once taken in slowly, the city is a mishmash of beautiful fairytale-like architecture – Arab-Normal churches (7th century churches tranformed into mosques and back again to churches), Baroque villas and palaces, Liberty and Art Nouveau theatres, and Rationalist (Fascist era) civil buildings. Palermo is bustling, beautiful and a completely different vibe from the small coastal and hill towns.

The old city center is Sicilian decadence with remnants of palaces and centuries-old street markets while its outskirts calm down with promenades and beaches. We only get a brief glimpse of the city when Portia and Jack dine-and-dash on arancini. But there’s much more to explore.

Vecchio Centro is the very busy historic center where you’ll find the Quattro Canti (four corners), an octagonal shaped, Baroque-era intersection with four very ornamented facades at Via Toledo and Via Maquedo. Just walk around and you’ll come across the Cattedrale, Palermo’s beautiful Arab-Norman cathedral decorated with  geometric patterns, ziggurat crenellations, maiolica cupolas and blind arches, and another fete of Arab-Norman architecture Palazzo dei Normanni whose Palatine Chapel is a jewel of Byzantine mosaics.

Another favourite neighbourhood is Politeama, home to the Teatro Massimo, a gorgeous 19th century opera house of Classic Sicilian architecture and where Tanya takes in “Madama Butterfly.” You may recognise it as the final scene in The Godfather III.

Every neighbourhood has something to explore, and my favourites are the centuries old street markets like the historic Vucciria and Ballarò, and Piazza Marina, the old port. There is so much to eat in Palermo – but panelle (deep fried chickpea square patties) and brioche con gelato (ice cream on a sweet bun) are just the tip of the iceberg. Want some suggestions? Send an email and I’ll share my latest finds.

Get Out and Road Trip

Palermo may be my end all/be all – I can’t tell you how many times I try to convince Darius to move here – but there is more to the west than this great city. Rent a car and drive. Southwest of the city is Monreale and its UNESCO World Heritage site Cattedrale di Monreale, which is decorated with Byzantine-style mosaics. You’ll have to drive through the city, and it’s worth a stop to visit the gardens of Villa Tasca (see below), the historic palazzo where Daphne and Harper overnighted.

Personally, I suggest you do like the Palermitani do and head to the beach. Just west of Palermo is Mondello, where one of the best fish spots in the west is. Keep going to Trappani and San Vito lo Capo if you want less day-trippers. Or take a tip from Jack and Portia and drive about one hour east to Cefalù. A few years back, my family spent the summer here- it was hot, beachy and quiet.

It’s All Greek to Me (and Darius)

Every visit to Western Sicily must include a walk through the magnificent Greek temples that stand guard on the coastal ridges of the west. In the 8th and 7th centuries BC, the Greeks began a large colonization push which included settlements in Southern Italy and Sicily. Magna Graecia as it was known gave us gorgeous structures at Agrigento, Selinunte, and Segesta.

Remember that amazing villa in where Daphne and Harper stayed? It is actually Villa Tasca in Palermo. The resplendent neoclassical palazzo was built in 1565 as a hunting lodge, surrounded by gardens, ponds, grottos and trees.

Overtime, Palermo swelled and the villa a bucolic oasis in the very busy city and home to the illustrious winemaking dynasty Tasca d’Almerita. Today, descendant Giuseppe Lanza Branciforte is both farmer and host, offering the four-bedroom palazzo as an idyllic vacation spot for about €5,500 (3 nights minimum). On that note, Quentin’s home is the private Villa Elena located just outside Noto. And no, you can’t stay overnight.

Blink and you might miss Villa Igiea, the century-old landmark on Palermo’s waterfront. I caught a glimpse of Villa Igiea in the White Lotus finale, and I’m pretty sure that if anyone is going to book a long weekend in Palermo, this is where they will stay. I’m partial to this hotel for a few reasons: I love having breakfast in the garden, and I love the decorative remnants from 1800s .While its design retains its historic bones, especially at the step-back-in-time Igiea Terrazzo Bar, in 2020, Rocco Forte Hotels completely renovated the rooms to a pleasant contemporary style.

Thinking about a visit to Sicily but don’t know where or how to start? Consider a Sicily travel consulting session with Erica. We’ll talk trip planning, when to visit, hotels, food and more.

A version of this article appeared in The Washington Post (December 2022). 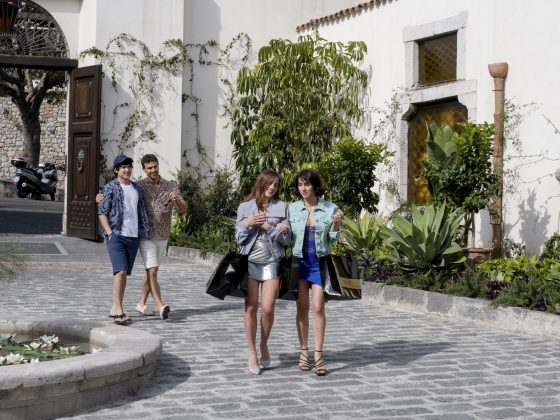