Creativity in the Kitchen

Over the past year or so, I’ve been picking up on a tiny, barely noticeable change in Rome’s restaurant scene that is slowly percolating. Let’s just call it the Next Gen Trattoria where chefs are going extreme to local recipes and prime materia, the top material locally sourced. Restaurants are designed for experience and sustainability. And focus is on local community.

When I first heard of RetroBottega, I had a good feeling but I had to see and eat for myself. It is not easy opening a new restaurant in Rome, especially not in the very epicenter. Located on via della Stelletta (between Piazza Navona and the Pantheon), Retrobottega is an ambitious gambit on a busy street- because Chefs Giuseppe Lo Iudice and Retrobottega partner and fellow chef Alessandro Miocchi aren’t interested in netting the tourist traffic but creating a community space and communal-eating concept for Rome residents and visitors alike.

First impression:  Pretty primordial and absolutely avant-gard, Retrobottega could be a minimalist mancave, but I prefer to call it a people’s cave. Miocchi and Iudice are front row and present every single day at RetroBottega – a deliciously dark-walled open space/hang out with just a few details like the polished chrome counters, moody lights and large tables.

And it is eating-obsessed where everything revolves around the exposed kitchen and chef’s counter, creating an interactive experience. The community wooden tables counter are nostalgic of traditional trattoria-style restaurant.  The space (and subsequently all of the Retro line up) is designed by MORQ, known for the gorgeous lines and prima materia, of course.

Form fits with function.  Lo Iucide and Miocchi have high-profile kitchen experience and wanted to bring their own culinary identities to Retrobottega, which means a love for tradition, a love for creative plus a mix of produce from the orto (garden) and fro their weekly foraging adventures in Abruzzo and the Northern part of Lazio.  Likewise, Lo Iudice and Miocchi are faithful to the food sources, investing in only local and seasonal so the nuances of the menu will change just as incrementally as the seasons do.  In fact, each week provides different variations of the same ingredients too, meaning the restaurant experiences constant evolution with new tastes from week to week, so if you do spot the tortelli pasta with Roman broccoli and anchovies, eat it.

For those with a little patience: one of my favorite Retrobottega dishes is not one but 20 Bites, a crazy Pac-Man insipred tasting menu of their 20 best dishes from antipasti to desserts, a line up which changes every two months.

Retropasta is a mecca for the pasta connoisseur. The team searches out shapes- traditional, forgotten and territorial filled pasta shapes like plin, anolini, raviol, tortelloni, tonnarellii and so many more. Recipes range from traditionally expected like cacio e pepe to fabulously unexpected like tortelloni di coniglio alla cacciatora. You order by the weight 50, 100 and 150 grams and the price is old-school affordable – 4 euro, 8 euro, you get the idea.

RetroVino, Intimate and hidden enoteca that unleashes 21st century culinary creativity in the heart of Rome’s centro storico- seats only 14 guests. I like to consider it the much needed evolution of the stereotypical Roman enoteca. MORQ stripped down a ground-level cantina/storage space in 16th century townhous to its original architectural lines by focusing on simple design, warm tones and natural materials all highlighting the wine display (3 levels of industrial metal shelves) flanking both sides of the oblong space. Cozy and effortlessly cool. Lo Iudice and Miocchi hand select wines from small, lesser known and hard-to-find producers and offer a delicious selection of Roman tapas from salumi and cheeses, sottoaceti and sottoli (pickled and oil cured vegetables foraged by Miocchi and Lo Iudice) to particular creations including peperoni tonnato and home-made pastrami. The last Sunday of the month, Miocchi invites chef friends like Daniele Usai (Il Tino, 1 star) for Pasta Games- where they battle a new filled pasta recipe, with DJ. Menu changes monthly- known as PastaGames. If you go, you’ll probably see me. 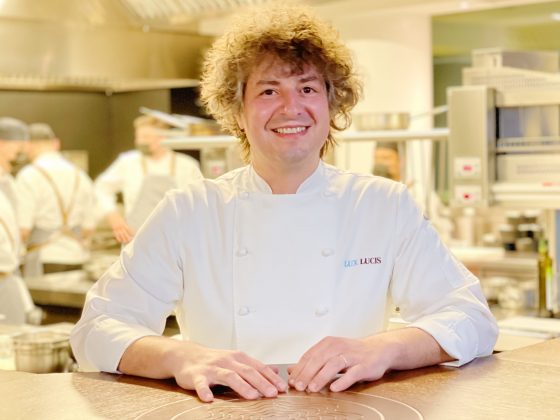