When the Washington Post’s new platform By The Way asked me to share my favorite neighborhoods in the city, I immediately thought of Flaminio, a large bean-shaped area north of Piazza del Popolo and immediately south of the bend in the Tiber. (Fyi- the river is one of our main sources of direction, and where it bends is key.) For a few years now, there’s been buzz about Flaminio upseating and upsetting Monti and Pigneto as Rome’s It neighborhood, but for me, it’s been IT since 1938 when my Zia Cesarina e Zio Furio moved in the area. My zio Romano has lived there ever since, and at some point, Flaminio became my official address, too.

Why Flaminio: This corner of Rome was where my uncle took me for the daily pane e prosciutto, where I learned Italian by playing in the piazza and where I spied on Giancarlo Giannini at the local corner caffe. Darius and I taught our girls to ride bicycles and cheer for Roma at the Stadio Olimpico, and went mini-ziplining in the Olympic Village. It feels like a small town in the midst of the big city, and no matter the changes or the reputation as the new hips spot, Flaminio keeps its vibe local.

Flaminio is a slice of modern Rome, just a 10-minute tram ride from one of the city’s northern gates, Porta del Popolo. Architecture from almost every modern and contemporary era can be found here, from 1930s rationalist buildings to structures built for the 1960 Olympics that reflect that decade’s urban-planning philosophy to 21st-century award-winning sites. Get your camera ready. Flaminio is the Rome you aren’t used to, but the residents are. The area is family-oriented and art-focused.

When we lived in Flaminio, Via Calderini was the spot where we fixed our computers and that was it. It was desolate, whether it was an Absent August or a busy October. The food spots in the area were restricted to Roman and that’s it. Now, Via Calderini is on the books for Michelin star Bistrot 64. What I love about this spot is that it is cozy and fits the residential vibe of the neighborhood, and then puts a spin of what you are expecting. Chef Kotaro Noda infuses regional dishes with Japanese spices, aromas and sensibility. The trattoria-style restaurant is one of the country’s most affordable Michelin-star eateries.

I remember standing on Romano’s terrace in 1999 when he pointed at a crane and said , “Ecco il novo museo”. The Maxxi would be under construction for another 9 years, but when it opened, it was our backyard and today it’s the backyard for some many families. Step inside, and it’s an adventure in contemporary art. Architect Zaha Hadid’s award-winning Maxxi museum houses a collection of Italy’s art and architecture from the 21st century. 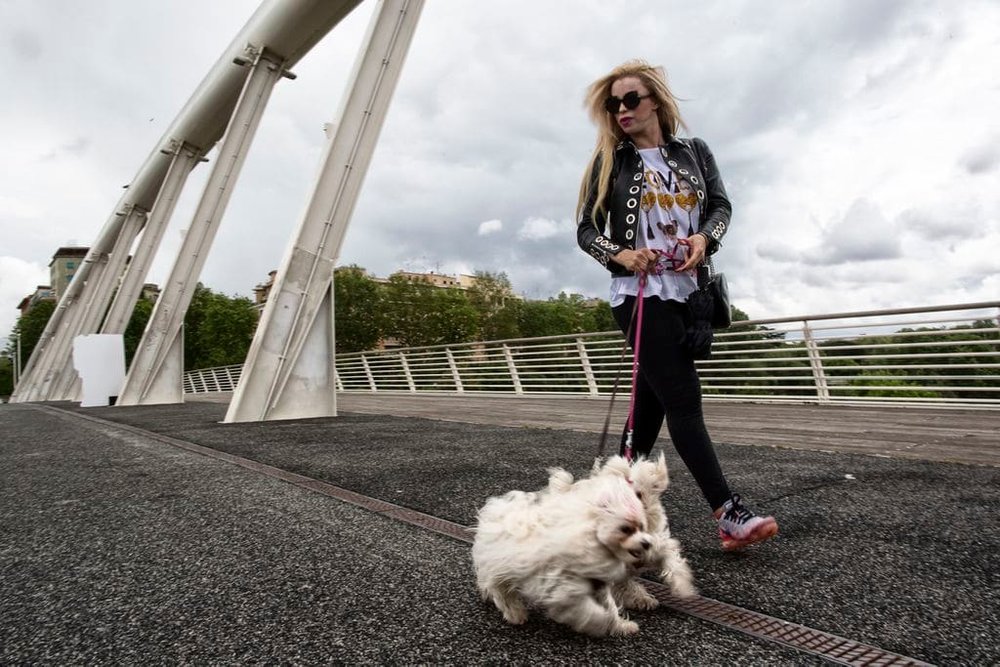 Another architectural fete that I saw in progress. When we first moved into the neighborhood, there was no bridge here, and it was no big deal. When we moved it, the neighborhood inaugurated this incredible pedestrian bridge with a full marching band, and we were in front. I love catching sunsets here. One of the newest bridges in Rome, the “music bridge,” from 2011, is a beautiful double-arched footbridge perfect for a romantic walk or photo ops. Under the south side is an informal skate park.

I have loved Fascist-era architecture for as long as I can remember, and I love visiting the Foro Italico with Romano, who reminds how he and my mom watched a chariot race here in 1950. A leftover from the 1920s, the Stadio dei Marmi is one of the prettiest tracks ever built, with low, marble stadium seats lined with statues of athletes posed in classical attire, surrounding a grass field and turf track. The entire Foro Italico complex is one of the best examples of Fascist-era architecture. A huge part of this complex is the 1960s Stadio Olimpico, host of the 1960 Olympics and stadium for Rome football teams AS Roma and SS Lazio.

This corner lounge took over a decades-old persian carpet shop, which was our directional point of reference whenever any of our friends “made “the trek” out to visit us. The entire palazzo (which included our apartment) is one of the Lungotevere Flaminio’s more beautiful examples of 1920s architecture- aka go big or go home, with incredible marbles and curves. Taking up the ground floor of a 1920s palazzo, Metropolita is a chic salon and cocktail lounge whose interiors play on the building’s Art Deco heritage, with retro sci-fi cinema touches.

My designer friend Arlene brought me to Spot and I immediately had a flashback to the space. It used to be our local gelateria. Now a gallery boutique, Spot catches the design vibe of the neighborhood with its hand-selected and restored design pieces. A diligently sourced collection of 20th-century furniture and design from epic names, including Gio Ponti, Enzo Mari and Gaetano Sciolari.

The Auditorium is the neighborhood landmark- an incredible monument in the center of the Village Olimpico, the former Olympic Village, now residence. There are indoor music halls and an outdoor theatre which hosts summer concerts as well as ice skating and other festivals. But in the neighborhood, we love it for its park, a green space with children’s jungle gym. Take me to your leader, or your conductor. Three monumental alien-pod-shaped domes, covered in zinc oxide — actually concert halls — hover over an outdoor theater at this Renzo Piano-designed auditorium complex. Aside from looking out of this world, the concert halls hold live music performances of all genres.

How to Get to Here

I feel like I’m an expert on arriving to Flaminio. All my life, I’ve come to the neighborhood for every kind of event and on every kind of transportation- car, scooter, bike, bus and tram. For commuters, it’s easy to reach the neighborhood, all you have is localize Piazza Mancini on your map. Piazza Mancini is a major bus depot and tram turnaround, and hub for the area. From Piazza del Popolo, take the Tram 2, from Trastevere, walk across the Tiber to the eastern side of the river and take the 280 bus. From Termini, just hop on the 910. Google Maps is pretty good for the bus times. In a rush? Download FreeNow or ItTaxi, taxi hailing apps. I’d ignore Uber, there never seems to be any drivers.

Your White Lotus Guide to Palermo and Western Sicily